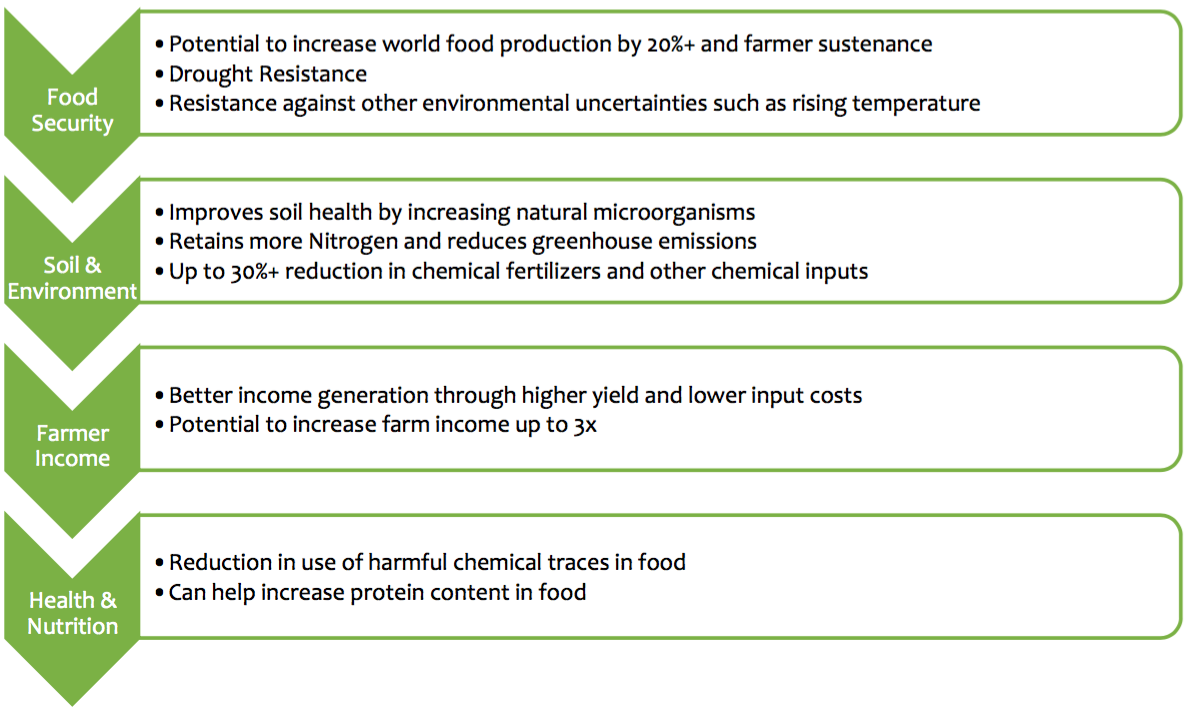 Developing Country farmer suicides – India witnesses more than 15,000 farmer suicides each year with the suicide rate being highest among cotton farmers in states such as Maharashtra. Crop loss has been cited as one of the largest factors leading to such cases. KGS Technology has the potential to uplift these smallholder farmers by providing resistance against drought, diseases, and increasing their farm income by up to 3x. KGS has achieved 75% yield increases in cotton in India

Nitrous oxide is released from the soil to the atmosphere through the microbial processes of de- nitrification. A variety of management practices such the heavy application of fertilizer leads to a greater release of Nitrogen from the soil. KGS technology helps reduce N2O emissions by both reducing dependence on nitrate fertilizers and also reducing the process of de-nitrification, thus allowing for more efficient utilization of Nitrogen by crops

Use of excess fertilizer, especially phosphorus (P) and nitrogen (N), can run off into surface water or leach into ground water, resulting in the pollution of water. KGS Technology allows for a 30% reduction in fertilizers and more efficiently contains fertilizer within the soil for use by plants, thus resulting in significantly lower fertilizer runoff and leaching into groundwater

KGS Technology develops a productive agro-ecosystem without negative ‘externalities’ or the unwanted side effects of conventional agriculture. KGS Technology allows farms to build a natural and resilient ecosystem

KGS Technology can enable smallholder farmers in developing countries to double, triple or even greater income increases.  We can help support these growing regions to become not only self-sufficient, but to become net agricultural exporters with the vast regions of land that are currently at highly under-productive levels of agricultural yield relative to the true potential in those land areas. KGS uniquely helps small famers without them incurring a significant capital expenditure burden or requiring major shifts in farm practices. KGS is ready to use by these farmers and is designed to typically payback in the immediate growing season with a return of 5x to 10x product cost making it the best means to aid a small farm and increase their household income and quality of life for their family.

Global pesticide consumption has tripled over the last two decades. With rapid urbanization and increasing food demand in countries such as China, pesticide use has increased to alarming levels, resulting in high residual pesticides in the food consumed. KGS products improve immunity and plant resistance against diseases & pests, thereby allowing for lower use of chemical pesticides

KGS Technology results in better nutritional content in crops. For example, the use of KGS products on soybean increases the amount of protein and oil content of the grain resulting in much higher nutritional value for processors and consumers

KGS Technology, with a 20%+ yield increase, and even higher yield increases in developing regions, could potentially address the issue of undernourishment and food security across the globe